On January 26, 2019 Bruce Sanford crossed the finish line to the big race track in the sky where God was waving the checkered flag. Bruce was a pioneer in the southern California Motorcycle community as a Racer, Entrepreneur and Promoter.  Bruce’s love for motorcycles started at sixteen, when he bought his first motorcycle, a 125cc Mustang. Shortly thereafter Bruce acquired a 500cc Triumph and started racing, you could find him at local drags, road racing at Paradise Mesa and TT Scrambles. (TT Scrambles were the precursor to today’s Motocross)

At eighteen Bruce was drafted into the Army and spent time in Korea towards the end of the war.  Upon his return from Korea he picked up his love for racing, you could find him on most weekends racing his Triumph at El Cajon Speedway and various other Southern California events.   In order to pay for his racing Bruce worked At Guy Urquhart’s motorcycle in San Diego selling Triumph’s and from there he worked at Convair as a designer/drafter on the Atlas-Centaur rocket program.

Bruce was determined to turn his passion for motorcycles into a career, he went on to build one of the first major buildings on Convoy street and open Mesa Cycle Center in Kearney Mesa.  He moved on from there to start Clairemont Cycle Supply, followed by stores in Escondido, Oceanside, El Cajon and Normal Heights.  Bruce sold his last store in 1994 but that did not mean he retired from motorcycles, the racing interest would not let him go quietly into retirement.

Bruce had an interest in race promotions earlier in his career where he was a member in the Hi Boots MC club in San Diego that organized the 1st Tecate Gran Prix.   The first event drew close to 50,000 spectators.  In the early Seventies Bruce rode his first Enduro and was so enthused with that type of racing he co-founded the Bush Eaters MC Club to bring Enduro’s to the San Diego region. These events were very successful often drawing 300-400 entries and overtaking popularity against local desert races. You could often find Bruce camping and scouting in the Imperial desert over a 12-year period looking to provide the region with fun and challenging events. There were typically 4 events per year, finally excessive rules and regulations imposed by the BLM made it difficult to implement a challenging Enduro course and the club was disbanded.

Upon Bruce’s retirement from running the retail motorcycle stores he formed, along with a core group of friends, the San Diego Flat Track Association which is now the Southern California Flat Track Association (SCFTA).   He organized the first flat track race at Barona Speedway in 1995.   He also went on to promote races at the Del Mar racetrack in addition to building tracks in Hemet and Temecula all for the Flat Track community.   Flat track finally found a permanent home in Perris, CA.

Bruce also put his designer/inventor skills to work to promote the sport.  He developed a series of roll chart holders and clocks for Enduro riders as well as an inexpensive fast fuel dump can for desert racers.  If you rode an enduro or desert race in the 80’ & 90’s there is a good chance you may have used one of his products.  (His roll charts are still used today)

Bruce loved to see his sons ride, everyone in the family had their own motorcycle even his wife Lucille. To ensure his wife could ride Bruce lowered a Yamaha DT125 so she could reach the ground. Bruce supported his youngest son Darren, becoming part of the pit crew, sponsor and chase crew in off road events such as the Baja 500 & 1000, and ISDE Enduros.

Bruce was a fun-loving guy, friend, father and husband who enjoyed living every day of his life.  In the end the old motor we call a body just gave out and could not be repaired anymore.  He will be sadly missed by his wife of 58 years, Lucille, his sons Gregory, Denis and Darren as well as his lovely daughter in-laws and nine wonderful grandchildren whom he loved dearly.  Bruce has left an incredible mark on the local motorcycling community, his family is very proud of his motorcycle legacy. Bruce was a true motorcycle enthusiast to the end in which he was devoted to enjoying and sharing his love of the two-wheel machine called a motorcycle.

A celebration of Life event is planned for Mar 31st, 2019, 1pm at the San Diego Auto/Motorcycle Museum.      Many photos and memorabilia will be on display.  Please come out and honor Bruce and share some stories.

In Lieu of flowers or gifts please donate to GoFundMe.com  (search Bruce Sanford)

Bruce Sanford Memorial Fund
San Diego Automotive Museum
2080 Pan American Plaza
San Diego, CA 92101
(Festivities will be outside in the back of the Museum)
For additional info and RSVP please contact mxrep@cox.net
RSVP by Mar 24th. 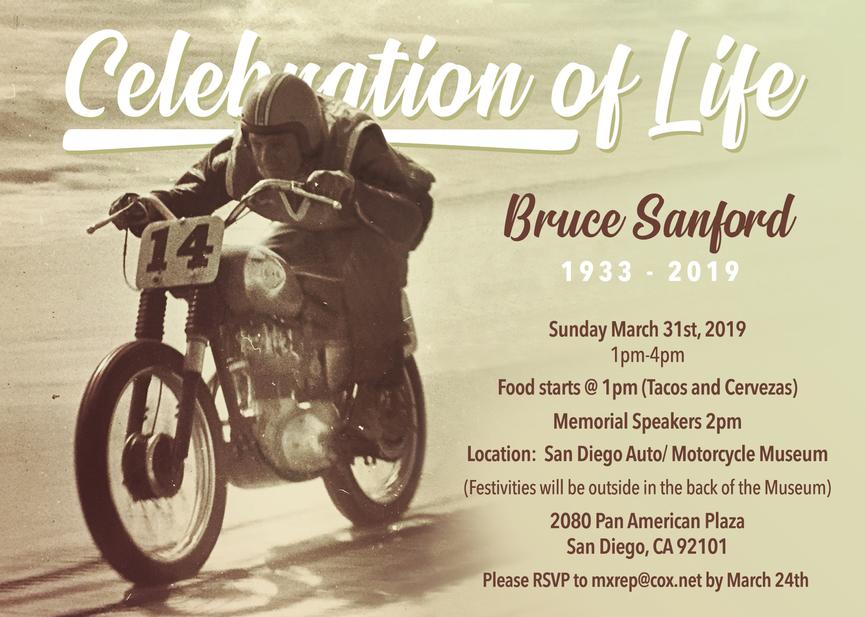